Find the signal in the noise


GPS signals are very weak, coming in at about 120 dBm ... which is below the thermal noise floor of ~ 100 dBm! If you try plotting an FFT 2 MHz wide about the L1 frequency you won't be able to distinguish the signal from the noise. 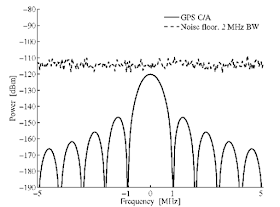 (Figure from A Software-Defined GPS and Galileo Receiver)

But it is there, and we can find it!

First, we need data. I used data collected with an RTL-SDR stick converted to complex output. The output from the RTL-SDR is interleaved unsigned short, whereas the input block expects signed complex numbers. I talked about this in a prior post; I use the gcc code myself.

Note the color of the block interfaces: Orange. This means floating point. Most of the blocks will default to complex, which is what you'd want for a lot of radio work but in this case it just makes things confusing as you will be plotting the triangle waves in both the Re and Im space. You can double click on each block and change the types to floating point or POWERUSER TIP: Click on the block and use up/down arrows to change the type. Once the flowgraph is complete (or download it here) hit play and you should see something like this: 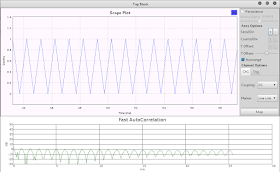 We see our triangle waves with a period of 1 Hz and the Fast Autocorrelation Sink showing peaks at 1 Hz, and negative peak at a rate of 1 Hz shifted by half a Hz.

So now let's do it with a real signal. You can use the same flowgraph, we just need to substitute the signal source block for a file source and specify our complex file. And since the file is complex, we need to change the data types. Finally, the throttle should be set to the sample rate of your input source - in my case, 2048000 Hz for the RTL-SDR. For the fast autocorrelation sink you will likely want to tweak the size to make the number of milliseconds a reasonable number. For my use I did (2**18)/2. Here's the updated diagram, running with the Fast Autocorrelation Sink, which you can download from github.

The coarse/acquisition code for GPS (C/A) has a period of 1023 chips which are transmitted at a rate of 1.023 MBit/s. This results in period of 1 millisecond. BAM! You can read more about the encoding on wikipedia. The L1 carrier at 1575.42 MHz has two codes, the C/A code and the navigation message. The navigation message varies with time as the satellites move through space but the C/A code does not change.  The C/A code is used for locking onto the satellites: Each satellite has a different unique C/A code. Earthside a receiver generates a particular C/A code and then shifts it in time and frequency to correlate the known C/A code with the C/A code of the satellite. Since we don't have a perfect clock we have to shift in time to line up our signal with the GPS signal timing and since the satellites are moving rapidly they frequency we receive is subject to a doppler shift of up to 5kHz (10kHz if we are moving very quickly, say, on a rocket or missile)